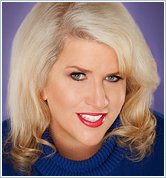 Share
View Author's Website
Glynis McCants
Glynis McCants has been studying Numerology for 21 years. She uses the Pythagoras Number system, which is over 2,500 years old. After evaluating more than 15,000 Numerology Charts, Glynis wrote the best-selling book <i>Glynis Has Your Number</i>. She is also the creator of <i>The Numerology Kit, The Individual Reading Chart, and theâ€ Are We Soul-mates?â€ Program</i>. You may have seen her on <i>Beyond</i> with James Van Praagh, <i>The Caroline Rhea Show, The Other Half, The Leeza Show, The View</i> and <i>Entertainment Tonight</i>. Sheâ€™s been featured in L.A. Confidential Magazine, Time Magazine, In Touch, Star Magazine, US Weekly and People Magazine. Glynis was a recurring guest on <i>The Tony Danza Show</i> for the past two years, and is currently heard weekly on <i>The Leeza At Night</i> radio show. She was also voted Favorite Guest on PBR Radio. Before the Presidential Elections in October, 2008, Glynis McCants was on <i>The View</i> and said that Barack Obama and Joe Biden would win. <br><br> The producers of the movie Number 23 hired her as the Numerology expert for the Jim Carrey film; she has a Numerology segment located under â€œSpecial Featuresâ€ on the <i>Number 23</i> DVD. She was also the Numerology Expert on the couples of the show <i>Dancing with the Stars</i>, and successfully predicted who the winners of the show would be on season 4 and season 5. <br><br> Glynis is a recurring guest on Coast-To-Coast AM radio with George Noory, where she averages no less than three million hits on her website after each radio appearance. Why such a massive response? Because listeners cannot get over Glynis' exceptional speed and accuracy. One of her specialties is predicting whether a celebrity couple will sizzle or fizzle as time goes on. When she does live readings, SHE DOES NOT MISS. <br><br> Glynis believes that knowledge is power, and when you have someone's name and date of birth, you can discover who they really are. However, numbers are not just in people, but also in everything: our homes, our business, every city, state etc. Glynis McCants has truly mastered the Science of Numerology, and her goal is to get everyone to do the same.