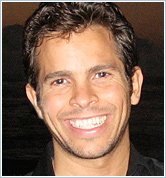 Nick Ortner is CEO of The Tapping Solution, LLC, a company with a mission to bring simple, effective, natural healing into the mainstream through Emotional Freedom Techniques (EFT) or “tapping.” Tapping is a healing modality that combines ancient Chinese acupressure and modern psychology.

Nick's goal is to empower people to create healthy, financially abundant and stress-free lives through his books, films, CDs, online events and speaking engagements attended by participants from all over the world.

His NY Times bestselling book, The Tapping Solution: A Revolutionary System for Stress-Free Living, was published by Hay House in 2013. Prior to that, Nick created and produced the breakthrough documentary film, The Tapping Solution, which follows ten people who used tapping to overcome tremendous challenges, including 30 years of chronic back pain, fibromyalgia, insomnia, devastating grief and more. Both Nick's book and film document real and extraordinary results that have inspired tens of thousands to follow suit by successfully applying tapping to their lives.

Nick has also produced first-of-their-kind online programs that teach easy, effective ways to apply tapping to anything limiting a person's life or health. Some noteworthy examples are: The "Tapping World Summit," a free, worldwide online event that just celebrated its fifth successful season and has been attended by over 500,000 people (www.tappingworldsummit.com); the "Tapping Insiders Club," a monthly membership program filled with articles, interviews, and videos with experts from the tapping field (www.tappinginsidersclub.com); and Nick's popular seven-week EFT coaching programs, which cover common issues such as finances, weight loss and more.

Nick and the Tapping Solution team are committed to spreading tapping throughout the world, and particularly to supporting its revolutionary and world-changing usage. They've raised over $250,000 for tapping-related charities such as ProjectLight: Rwanda, which aids genocide victims in that country (http://projectlightrwanda.com), The Veterans Stress Project, for veterans with PTSD (www.stressproject.org), and You Can Thrive! for women with cancer (http://youcanthrive.org/). In 2013, Nick created The Tapping Solution Foundation, which has already raised over $170,000 for charitable work in Newtown, CT to support the community after the tragic shootings at the Sandy Hook Elementary School.

Nick lives in Newtown, CT with his wife, Brenna and is already working on his next book.