The Gift of Fire 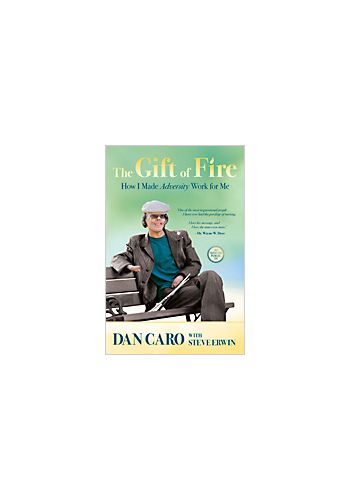 Dan Caro has been proving the world wrong since he was in diapers. When he was two years old, he was engulfed in a fireball during a gasoline explosion in the family garage and was left with third-degree burns over most of his body—so severe that doctors held out little hope he’d survive more than a few days. Dan was in such excruciating pain that his devastated parents silently prayed for God to end their son’s suffering and welcome him into heaven. And it seemed as if God was willing to oblige—Dan technically died on the operating table several times in the hours following the accident.

But even though his heart stopped, Dan’s spirit wasn’t ready to give up . . . somehow he knew he had work to do. Despite the odds, Dan survived, but life would not be easy. The fire left him badly maimed and disfigured. His hands were burned away, as was most of his skin and nearly all of his face. He would endure years of painful surgeries and endless months of lonely isolation in burn units, only to suffer the agony of social rejection, shunned and called “monster” by both children and adults in his Louisiana hometown.

With the support of his loving parents and siblings, Dan did not despair. He kept his heart open to the world and focused on the positive energy around him. Before his sixth birthday, he vowed that his life would not be defined by the way others saw him or the restrictions of his so-called physical handicaps. Dan set himself a series of life goals, starting with the art of tying his shoelaces without fingers. Once he had achieved that milestone, he decided he could do anything . . . so why not learn to play the drums?

When Dan was told he’d never be able to do so, he promised himself that one day he’d become one of the most accomplished drummers in the city that gave jazz its name—New Orleans! Since that day, Dan’s music has inspired thousands, and many more have also been inspired by his personal philosophy of focusing on the positive, refusing to accept limits, and living life with an open heart. Today, the young man who was once shunned and called “monster” by his neighbors is very much in demand as a public speaker and travels the country encouraging others to not just overcome life’s hardships, but to view adversity as a gift that can drive us toward reaching our full potential. See less
Reviews
Write Your Own Review
Only registered users can write reviews. Please sign in or create an account