What's In It For Them?

9 Genius Networking Principles to Get What You Want by Helping Others Get What They Want
Write a review
Hardcover $26.99 eBook $12.99 Audio Download $30.99
List Price $30.99 HayHouse.com $15.50 (save 50%)
Available
Add to Wish List Facebook Twitter Email
Skip to the end of the images gallery 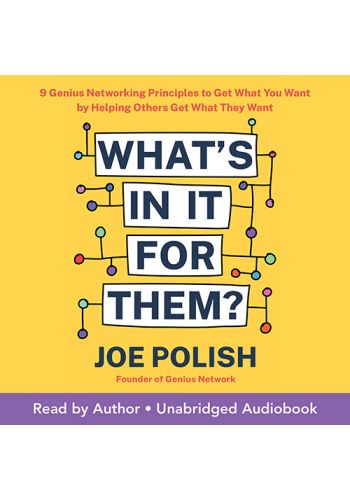 There’s no shortage of networking and entrepreneurship advice in books and on social media in today’s world—but it’s harder than ever to know what’s authentic. To make matters...See more

There’s no shortage of networking and entrepreneurship advice in books and on social media in today’s world—but it’s harder than ever to know what’s authentic. To make matters worse, taking the wrong advice can result in superficial connections, transactional relationships, and unsatisfying interactions with others without any real rapport.

Fortunately, as entrepreneur and marketer extraordinaire Joe Polish has discovered, there’s a simple (though sometimes not easy) way out that begins with one question: “What’s in it for them?”

In What’s in It for Them?, Polish faces the problem of personal and professional disconnection head-on, offering entrepreneurs a heart- and mind-expanding guide on how to:

And much more—all to help the givers of the world thrive in business without neglecting their relationships.

Early in life, Joe Polish’s struggles with trauma and addiction led him to a disconnected life. After getting sober in recovery, he spent years developing his genuine and generous approach to building rapport and transformed from a dead broke carpet cleaner to being dubbed “the most connected person on the planet” for his work with Genius Network, one of the world’s most impactful networking groups for high-achieving entrepreneurs.

After 30 years of putting his own advice into practice, Polish now speaks to audiences all around the world and is surrounded by business leaders and billionaires he calls friends. In What’s in It for Them?, he explains his one-of-a-kind approach to rapport-building he used to get there—and offers a few cautionary tales along the way.

See less
Reviews
Write Your Own Review
Only registered users can write reviews. Please sign in or create an account